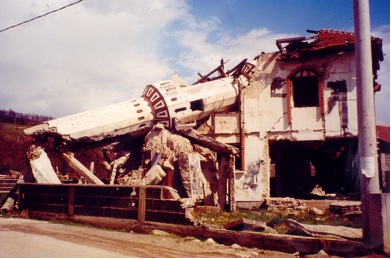 This event aims at addressing one particular aspect of processes through which cultural heritage is shaped and re-shaped: destruction of heritage items during armed conflicts, their postconflict reconstruction, and the undergone transformations in forms, mediation and meanings. This aspect will be presented through the case of systematic destruction of heritage items and sites in Bosnia-Herzegovina during the 1992-1995 war.
András Riedlmayer, head of the Documentation Center of the Aga Khan Program for Islamic Architecture at Harvard’s Fine Arts Library, will present some of the empirical findings of his extensive efforts in documenting heritage destruction of historical sites, edifices, monuments, libraries and museums in Bosnia-Herzegovina and Kosovo since the beginning of wars in former Yugoslavia in the early 1990s. He was the initiator of the Bosnian Manuscript Ingathering Project, an effort to trace and recover microfilms and photocopies of some of the thousands of unique manuscripts and historical documents that were burned and destroyed together with archives and libraries in Bosnia-Herzegovina during the war. He has testified about his findings as an expert witness before the International Criminal Tribunal for Former Yugoslavia in Den Haag.
Maja LovrenoviÄ‡, PhD student in anthropology at the VU University Amsterdam, works on memory and violence in postwar Bosnia-Herzegovina. She will discuss some examples of the postwar reconstructions of destroyed heritage items and how that spatially reflects transformations in notions of heritage, memory and belonging in the postwar period in Bosnia-Herzegovina. Presentations will be followed by open discussion on related issues.

We kindly ask you to register with Irene.stengs@meertens.knaw.nl