A first collective volume on language in the mines 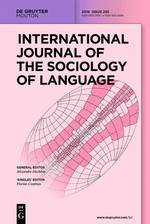 We have just published a special issue of the International Journal for the Sociology of Language on language use in the mines. Language use in mining poses a particular challenge, since mining creates very specific social ecological circumstances. The issue came out of a symposium comparing mining languages in Africa, South America, and North Western Europe, held at Maastricht University, the Netherlands.

The aim is to study the social practices and structural features of mining languages in a comparative perspective. Factors involved in the unique social ecology of mining languages are labour shortages and recruiting strategies, rapid expansion and migration, the multi-ethnic composition of the workforce, and power hierarchies between unskilled and skilled workers. Gender and male bonding, concerns for danger and safety, special technology, job specialization, life underground as distinct from above ground, and non-verbal communication also play a role. The darkness of the mine makes explicit oral communication mandatory.

There are often center-periphery dynamics between places where mines are exploited and power centers in the nation-state. Generally, the language underground is not that of the owners of the mines, but a lingua franca spoken by a large chunk of the workforce. Also, there is always special vocabulary and new words being formed.

The focus in the volume is on three continents: Africa, South America, and northern Europe. Rajend Mesthrie describes the origin and evolving status of Fanakalo in the province of Gauteng, South Africa. It was recruited for the purposes of creating a mining language after 1867, which then was very widely spread. In recent years it has both been reviled and re-valued. Whereas Fanakalo has been invariably denigrated by intellectuals as a language of oppression rather than culture, there have been some surprising recent developments. Recently, Fanakalo has gained new force as the language preferred by the strikers for mass meetings and negotiations with management.

Leonie Cornipsand Vincent de Rooij compare sociolinguistic and structural outcomes of language contact processes in two mining areas, namely the African Katanga region in the southeast of what is now the DR Congo and in Heerlen in the southeastern province of Limburg in the Netherlands. Both in Katanga and Heerlen, the resources were located in border regions peripheral to central seats of government. Similar social conditions of language contact were responsible for the genesis of the language varieties underground and above ground. These were characterized by the regularization of grammatical properties and the expansion of aspect marking.

Discussing a mining area near the one explored by Cornips, Nantke Pecht investigates grammatical features of Cité Duits, a moribund in-group coalminers’ language spoken in the town of Eisden in Belgian Limburg. Certain features of Cité Duits are a fusion of Southern Dutch, German and the Maaslands dialect spoken in the area. Speakers produce forms and syntactic structures not found in one of the three contact varieties involved, suggesting a reallocated deployment of the grammatical system. Not only contact-, but also language-internal tendencies may play a role: speakers use linguistic resources in novel ways and develop “innovative structures” to mark semantic properties.

In a nearby region, Stefania Marzo investigates the short and long-term effects of the language issues Italian mine workers families encountered when they arrived in Belgian Limburg (Flanders). The complex linguistic integration of the first-generation migrants was picked up and further developed by the new generations and transmitted in young peoples’ meta-reflections on their actual hybrid linguistic practices. The study corroborates universal characteristics of mining jargons and opens new perspectives on the study of linguistic and social long-term effects of these varieties.

Shifting to South America, Pieter Muysken charts the multilingual setting of the silver mines in colonial Potosí, Bolivia, and the complex relations between Spanish and the two main indigenous languages Quechua and Aymara in the mining languages. The main source used is a mining vocabulary from 1610, which contains terms both in Spanish and in the indigenous languages Quechua and Aymara.

Finally, Laura Álvarez López turns to Brazil, analyzing specific vocabulary, possibly the remains of a mining language spoken by descendants of Africans. She analyzes 149 lexical items registered in the 1920s in a rural region of Minas Gerais, near the city of Diamantina. The distribution of the lexical items in different semantic domains and word classes indicates that the language of the enslaved Africans, Umbundu, maintained a high status in the area, and that this variety was not limited to mining activities, but was probably used in everyday life as a secret code.

The current issue hopes to contribute to a broader perspective on the way specific social practices constitute ecologies in which specific linguistic practices emerge. Here the case presented was mining, but related topics would include tunneling and the oil industry. Of course, there is a large tradition in pidgin and creole studies to link specific economic activities to linguistic practices such as the emergence of specific kinds of pidgins, but the potential scope of this line of enquiry is much wider.