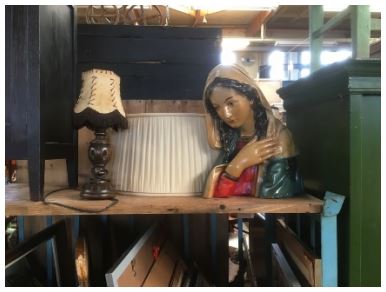 This NGG conference invites reflection on the intertwinements of religion and heritage. The conference explores a number of pressing issues, inquiring what futures may lie ahead for the religious pasts that emerge, for instance, in the contexts of ongoing de-churching in Europe, or past and present Christian mission activities in Africa, Asia, Latin America and the Pacific. What happens when religion is reframed as heritage? The conference aims to engage a variety of actors, including scholars, religious communities, heritage professionals, institutions and policy-makers as to allow for discussions along a variety of registers, e.g. political, religious, cultural, historical.

The topic of religion and heritage is a productive starting point to explore a number of pressing questions with regard to the invention of new futures for religious pasts, as this occurs, for instance, as part and parcel of ongoing de-churching in the Netherlands and other countries in Europe, or in the context of past and present Christian mission activities in Africa, Asia, Latin America and the Pacific. What happens when religion is re-framed and its material culture becomes heritagized in a secular context? How do different religious communities lay claim to heritage status, and how does this co-exist with their religious orientation? What are the impacts of recent developments in global politics, in which heritage, culture and religion are often intertwined, on the lives of religious communities? In what ways is the category of heritage employed by religious communities to stimulate cohesion and identity or when it is used to exclude certain specific religious minorities from being recognised as part of mainstream society?

Underlying these matters is a double development: the heritagization of religion and the sacralization of heritage. Firstly, we might point to the phenomenon of heritagization of religion, i.e. the process by which religious sites, objects or practices come to be seen (and valued) as heritage (or not). Heritagization involves a complex process of diverse interests, stakeholders and powerplays and is always subject to contestations. It is worth remembering that the category of heritage itself, with its roots in nation-building, colonialism and imperialism, is, much like the notion of religion, involved in complex negotiations of power, meaning and identity for which the past is an important resource. This has its contemporary corollary in the current rise of nationalisms across the globe, including its entanglements with globalization and the embrace of religious values as heritage. But the process of heritagization of religion can also be an emancipatory process, in which religious minorities can claim recognition and protection by being acknowledged as heritage. Heritagization, in short, involves a variety of actors, including religious communities, heritage professionals, institutions, policy-makers as well as a variety of registers, e.g. political, religious, cultural, historical, all of which spill over into each other in often emotional clashes and negotiations.

Secondly, heritage-making itself can be understood as a process of sacralization. Heritagemaking by definition is involved in the process of setting apart, elevating to the level of symbolizing the timeless essence of a community, which is done by canonizing and ritualizing cultural practices. We may think here of the ways in which objects of heritage are conserved, displayed and venerated (the case of the bullet-ridden American flag comes to mind), but also of the escalating intensity with which debates about identity revolve around the protection of ‘our’ heritage against imagined Others.

Presently we can see this double development unfolding across the globe. In places as far apart as Vietnam and Georgia, religious and political elites at once strive for heritage status of their site of religious worship. On a Dutch level, religion-as-heritage is frequently addressed in political debates, and heritage-professionals are actively exploring how to negotiate heritage and religion in times in which religious diversity and nascent nationalism make for a dynamic and polarizing environment. The marked process of de-churching raises fundamental questions about how to deal with Christian material culture that possibly loses its meaning and original users. Religious communities themselves are confronted with heritagization in more than one way.

Religious communities might resist heritagization of religious objects and practices because of the perceived secularizing effect it has. Conversely, communities that embrace objects or practices as cultural heritage that were or are religious in origin might not acknowledge religious communities as primary stakeholders of said heritage and even experience their claims as burdensome. At the same time the original religious context of such objects and practices is often not explained in the display. In this sense, it is also important to focus on material forms of religious pasts that did and do not count as heritage, and are excluded from that status. A great deal of objects that were dismissed as “idols” and “fetishes”, for instance, were destroyed by Christian missions in Africa, Asia and Latin-America, rather than being heritagized. On the other hand, some of these objects were collected by mission societies and placed in the collections of mission museums and ethnological museums. Researchers at universities and museum institutions currently are investigating colonial heritage (and its lacunas), indicating a need for practical and theoretical innovation.

Aimed at preservation, heritage articulates different views of what should remain and what should be destroyed. Categories, religious in origin, like iconoclasm and iconophilia, are addressed in new ways: how may objects that have fallen victim to iconoclasm be reframed as heritage and how may criticism categorize such heritage formation as iconophilia, and hence as blasphemy?

We envision an interdisciplinary conference in which the conceptual exploration of the themes of religion and heritage are coupled with analyses of how heritage and religion play out on an everyday, practical level. This allows in particular for an innovative debate between scholars of religion, heritage professionals, as well as historians, anthropologists, theologians and representatives of religious communities. We invite contributions with conceptual, historical and/or practical approaches to the topic of religion and heritage.

– Conceptual: • What is “heritagization of religion”? • How does it interconnect with power struggles between stakeholders in various contexts? • In which ways does heritage-making itself lead to processes of sacralization?

– Historical: • What are the biographies of tangible and intangible religious heritage forms? • Which processes of re-interpretation are involved and • how do these interconnect with religious developments, nation-building, colonialism and global developments?

– Practical: • Which futures are imagined for religious heritage in the Netherlands, in Europe, in the Global South and elsewhere? • Is religious heritage secular? • Does this heritage become a new secular-sacred? • Who is involved and who takes responsibility for such heritage? • Which contestations are involved?

We aim to have a representation of scholarship on different historical periods, regions in the world, religious traditions and theoretical perspectives. Through the invited plenary sessions and keynotes, we will bring different strands of scholarship in conversation with each other around the conference theme. We can already confirm three keynote speakers:
– Mirjam Hoijtink (University of Amsterdam)
– Marian Buchardt (University of Leipzig)
– Cyril Isnart (CNRS-Aix Marseille).

Scholars are invited to propose abstracts for papers, or panels by sending an email to: NGG2021@meertens.knaw.nl (extended deadline June 15, 2021). We aim to notify you whether your proposal is accepted by 1 July 2021.

The conference will take place on the premises of the University of Amsterdam and the Meertens Institute. Participants are expected to arrange for their accommodation by themselves. More detailed logistic information about registration and fees will follow by 1 June.